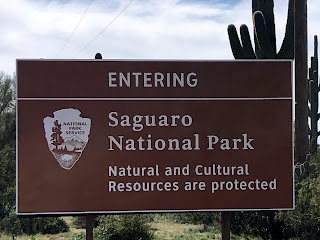 I’ve always been fascinated by trees so I wasn’t sure if I could love a part of the country with very few of them. I was wrong. The Saguaro cactus is a tree-like cactus species and is a delight. One of the only places in America you will find this large cactus with character (there are a few in CA) is in the Sonoran desert of Arizona. They grow very slowly (a ten year old plant may only be two inches tall) and all start out as a single column. They don’t produce their first arm, or branch, until they are 50 years old. Then they can grow as many as 25 arms. That’s where all the character comes from. They are generally considered an adult at 125 years and can live to be 200. After such a slow start in life they can eventually grow to a height of 60 feet. Saguaros have pleats that allow them to expand when they drink water (like an accordion) and contract as they use up their water supply.

I’m not the only one who feels drawn to these giants. A local volunteer in the park was teaching us about the geology of the area but kept pointing out her favorite Saguaros. At one point she even got a bit emotional as she talked about one of the larger ones being struck by lightning. I’m afraid if I lived here I might find myself giving them names. 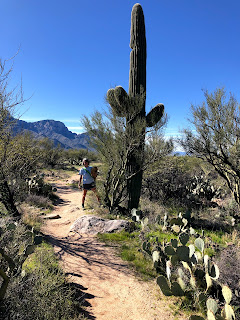 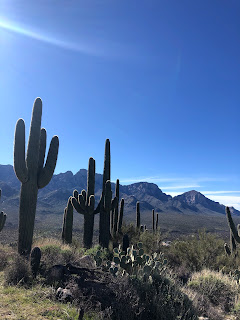 Posted by Travels with Starbaby by Mickie Amundson at 2:18 PM No comments: 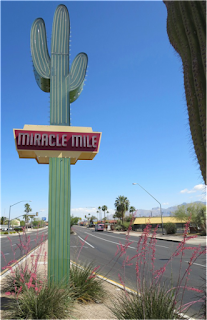 Catalina State Park is about ten miles north of Tucson in what’s called the Oro Valley. With a metropolitan area so close to our campground, we find ourselves torn between a day exploring the city or hiking in the nearby National Park. Thank goodness we have time to do a bit of both. Our first trip into Tucson took us to a really fun disc golf course called Santa Cruz River Park. It’s a fairly open course with plenty of mesquites, palo verde and other desert flora, but little cacti; which is great for Starbaby. After 18 holes, we found ourselves on the “Miracle Mile”. The Miracle Mile is almost 2 miles of roadway known for embracing America’s fascination with automobiles and automobile culture from the 1920’s through the 1960’s. At one time this corridor boasted the first landscaped median roadway in the country and was known for its neon signs and motels. Today it’s probably better known for the Sonoran hotdog. The Sonoran hotdog originates from Hermosillo, Mexico and features a slightly sweet bun, bacon wrapped wiener, pinto beans, onion, tomato, salsa verde, green chili sauce, mustard and mayo. We had lunch at El Guero Canelo restaurant and throughly enjoyed this quintessential Tucson Mexican food! 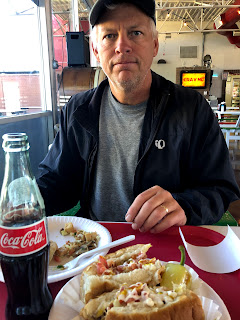 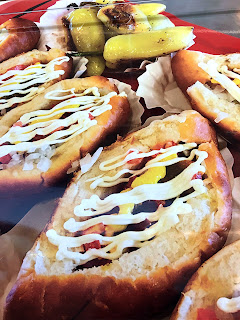 Posted by Travels with Starbaby by Mickie Amundson at 1:51 PM No comments: 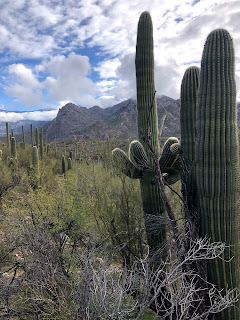 We made it to Tucson! One of the best things about knowing you’ll be in one place for two weeks, is the realization that you can slow down. There is more time to do and see things in the area, but also time to address some of the issues/chores that have been put on the back burner for over a month. In the desert southwest there is dust, sand and wind everywhere you go, so eventually everything outside accumulates a thin coating of grim. To further exasperate the problem, most of the areas we visit don’t have an over abundance of water, so rules and regulations are in place to restrict water use for things like washing vehicles or cleaning equipment. Mark can run his truck through the local car wash, but I’m always hesitant to pull our camper through one. Imagine my excitement upon awakening, our first morning at Catalina State Park,  realizing we’d had a pretty decent rain storm in the desert! I got out at first light and with the micro fiber towels, I always carry with me, was able to use the water provided by the storm to wipe away the film of dirt covering our camper. I now have a shiny trailer again without breaking any rules! 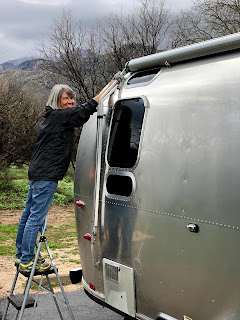 Posted by Travels with Starbaby by Mickie Amundson at 1:17 PM No comments:

Do Drink the Water 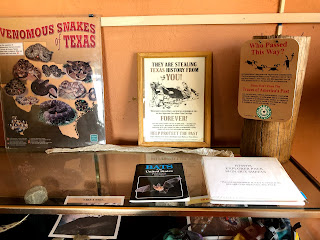 One negative thing about arriving in February, at a state park, known for its Caverns and bat population, is the bats aren’t here this time of the year. In the winter, they hibernate in caves, about 40 miles away, at 8,000 feet elevation. The caves here at Kartchner are their summer home. Mark and I love bats and enjoy learning more about them as we travel across the desert southwest. We were so surprised, when we noticed a book, written by professor/Dr. Mick Harvey, (late husband of our friend Lora, back home) at the interpretive/educational center at a small park in Texas. What a small interconnected world it is!

Another interesting thing, but perhaps only to a few, is Mark and my recent addiction to Topo Chico; a carbonated water bottled in Monterrey, Mexico. Our daughter and son-in-law have been drinking this Mineral water, in a glass bottle, for years. After spending a month in Texas, where it is the mainstay beverage, stocked in almost every grocery store and gas station, in even the most remote locations, it became our beverage of choice. We couldn’t believe it when we crossed into Arizona and couldn’t find the product anywhere. After doing some research, I discovered that Topo Chico (bottled since the late 1880’s) was almost only found in Mexico and Texas until the 1990’s. Coca-Cola had used the company to bottle it’s Mexican coke products since the 1920’s. They purchased the small Mexican company in 2017, to compete in the growing sparkling water market. Many people are upset that a niche company like Topo Chico has been swallowed up by a big American corporation. I understand that, but it’s kind of nice to know that Topo Chico has gone global and we can most likely pick up a case in Tucson. 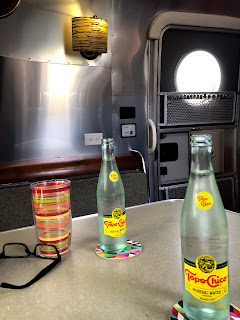 Posted by Travels with Starbaby by Mickie Amundson at 1:31 PM No comments: 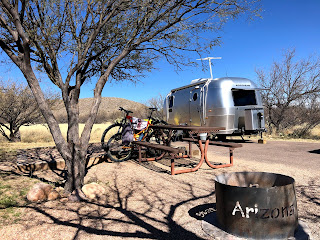 We made it to Arizona and are staying at Kartchner State Park; a beautiful park built around a cave discovered in 1974. We only have four nights here, so decided, after hiking the park’s trails and playing disc golf in the neighboring town of Sierra Vista, we’d use a day for sightseeing.

Tombstone and Bisbee are two old mining towns 23 miles from each other and less than an hours  drive from the park. The history of the old west is apparent in both places but you won’t find two more diverse western towns. Tombstone, of course, is world famous for the 1881 gunfight near the OK Corral. Most things to see and do there revolve around its Wild West history. Bisbee is an example of a thriving mining camp that has transitioned to a free-spirited place with a thriving arts/music/hospitality scene. The town was literally built into the rolling hills, at 5,000 feet elevation, surrounded by the desert. Named by Frommer’s as one of the best small towns to visit, in 2018, it’s sometimes referred to as a “desert dream village”!

It was a day with something for everyone. I loved the quaintness of Bisbee. Mark loved the spectacle of Tombstone and we both loved being in places with so much history. Ironically, one of the most dog friendly places we’ve visited is Tombstone. Too bad Starbaby is frightened by the sound of gunfire! 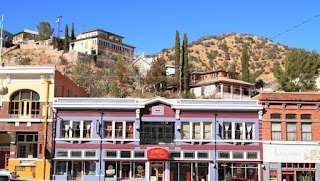 Posted by Travels with Starbaby by Mickie Amundson at 3:20 PM No comments: 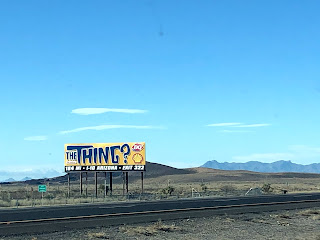 Travel days are sometimes a bit monotonous, if the only roadway available to get from point A to point B is the interstate. Today’s drive, however, had an interesting stop. “The Thing“ is a roadside attraction that has been around since the 1960’s. It is hyped by large yellow billboards, on the I 10 interstate between El Paso, Texas and Tucson, Arizona. Some have estimated there are 247 billboards over about 200 miles. Each billboard teases the traveler with questions; The Thing? Wonder of the desert. The Thing? Mystery of Arizona. The Thing? Have you seen it. The Thing? Don’t miss it!

Last time we passed this way, I somehow resisted the urge to stop, but there was no escape the second time through! I won’t ruin the surprise, for fellow travelers passing this way, other than to say I hope the dimly lit photo I’ve included doesn’t discourage anyone else from solving this “mystery of Arizona” for themselves! 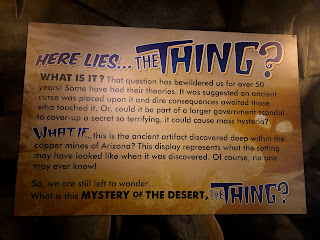 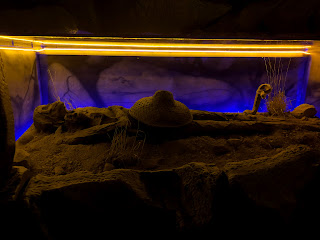 Posted by Travels with Starbaby by Mickie Amundson at 3:01 PM No comments: 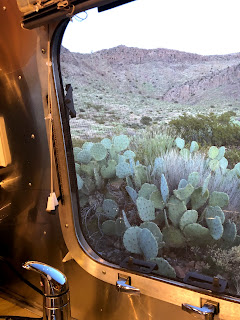 After leaving the El Paso area, we headed for our first destination stop in New Mexico; Rockhound State Park, in the Little Florida Mountains, southeast of Deming, NM. Rockhound is the polar opposite of Heuco Tanks! Not only are you encouraged to roam through the park, but are also allowed to remove natural objects (rocks; up to a 15 pound limit). The two semi precious gems visitors are most likely to prospect for are Jasper and Perlite. Since Mark and I aren’t “rockhounds”, we just hiked the park’s trails and visited a neighboring hot springs. We were glad we had taken advantage of the 108° soaking pools at Faywood Hot Springs, when we woke up, on our second morning at the park, to a snowstorm in the desert! So beautiful! 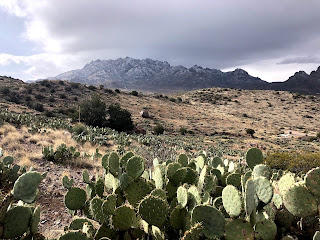 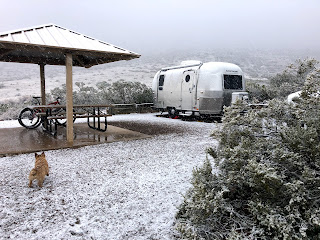 Posted by Travels with Starbaby by Mickie Amundson at 8:17 AM No comments:

Travels with Starbaby by Mickie Amundson